Realme has begun to cement its place as one of the premier companies that bring some stellar flagship features down to a more affordable price point – being eerily reminiscent of the early years of OnePlus. The Realme X50 5G is a stunning device, can the even cheaper Realme 7 series live up to the hype?

Realme has just revealed the full details of the European launch of the Realme 7 and Realme 7 Pro and we’ve gone hands on with the regular model to provide our first impressions on this super-cheap device. At an even lower price than the impressive X50 5G, the key question will be if Realme can still make this phone a worthy buy, despite all the necessary cost-cutting. Let’s take a look. 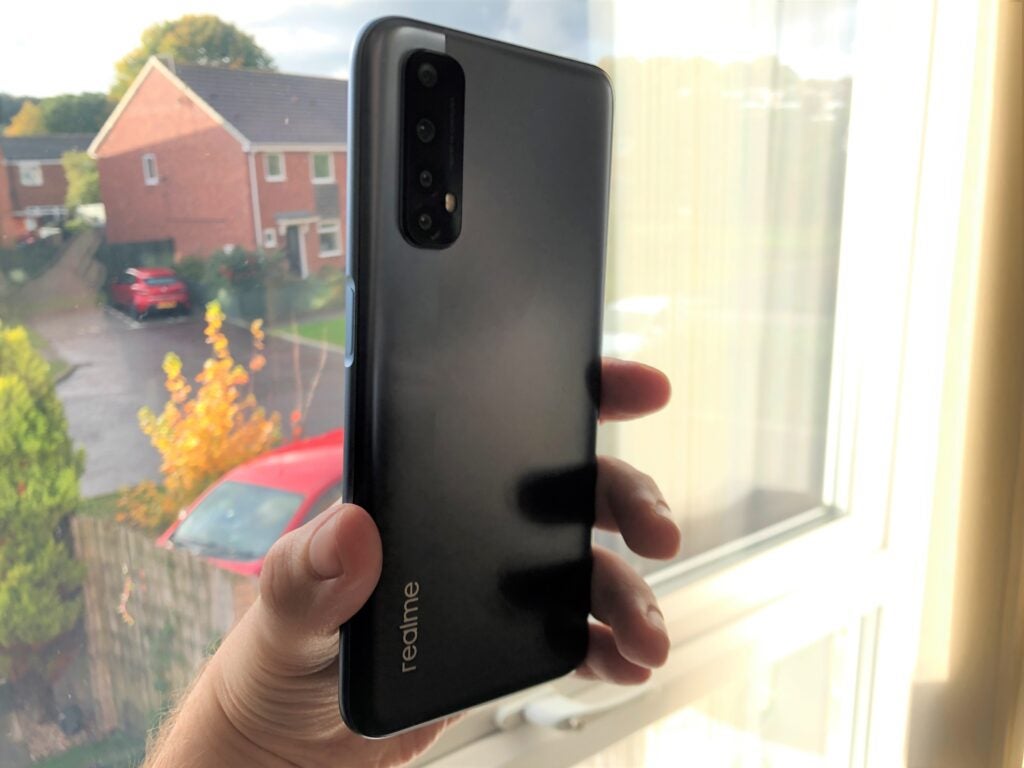 First off, Realme regularly does a great job of providing devices that look like more expensive flagships, even if they don’t use the same materials. At first glance, the Realme 7 nails this too – it really wouldn’t look out of place sitting alongside premium Android flagships. The 6.5-inch display, and it’s fairly miniature selfie cam cutout, make for a striking look and an immersive experience.

The impressive design extends to the rear of the device – with our review model sporting the Mist Blue colour option (Mist White is also available). The shiny plastic back is soft to the touch and comfortably repels any smudges. The Mist Blue design covers the whole back but is made more distinct by a dividing line cutting vertically up through the camera module (which isn’t overly bearing in its own right) and offering a ledge for the “realme” logo to sit on. 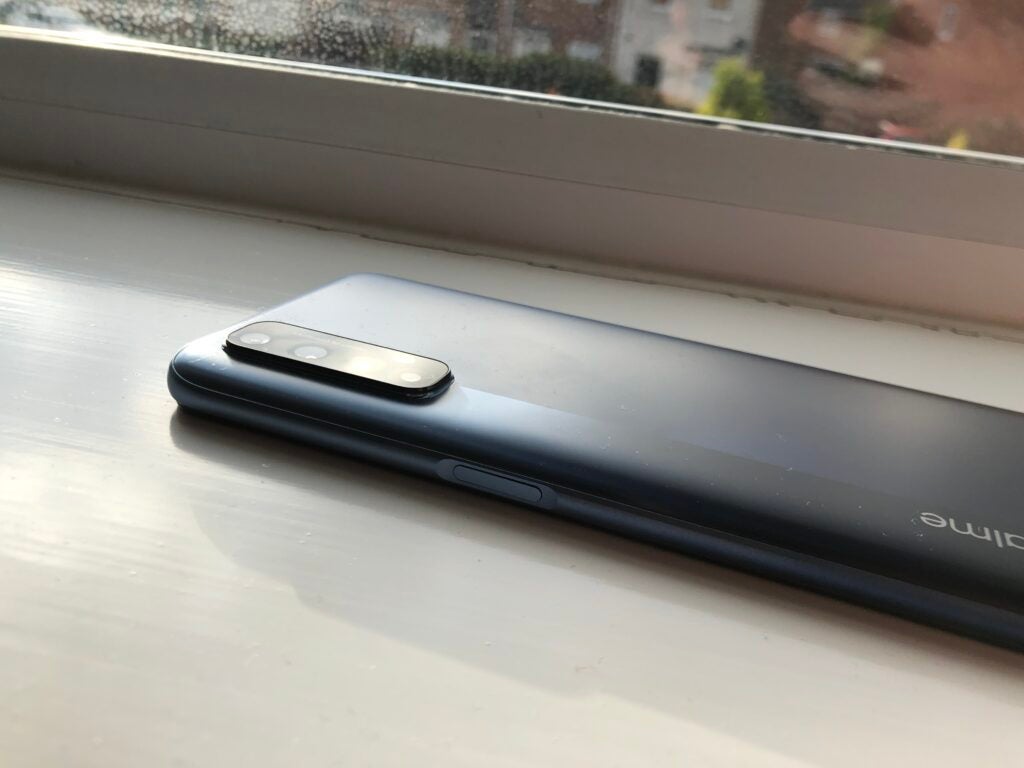 The display is far from a black mark on the rest of the delightful design, even if it doesn’t offer eye-catching colour. The FHD+ panel gets to a decent level of brightness but it isn’t anything to write home about.

However, what does work massively in the displays favour is a 90Hz refresh rate. The higher rate is beneficial in general use, with smooth scrolling that is great to see on such a low-cost device.

The Realme 7 has a focus on gaming, being the first device to feature the MediaTek G95 gaming chip, and this is another factor that greatly benefits from that 90Hz display – offering smooth gameplay even if it isn’t colour and pixel rich.

These gaming priorities become apparent after not much time using the device. Playing games like Call of Duty Mobile and PUBG Mobile didn’t lead to any issue – an impressive feat for such an affordable phone. However, step away from gaming and you realise that the lower specs of this device do come a bit more to the fore – especially when you’re jumping between apps. 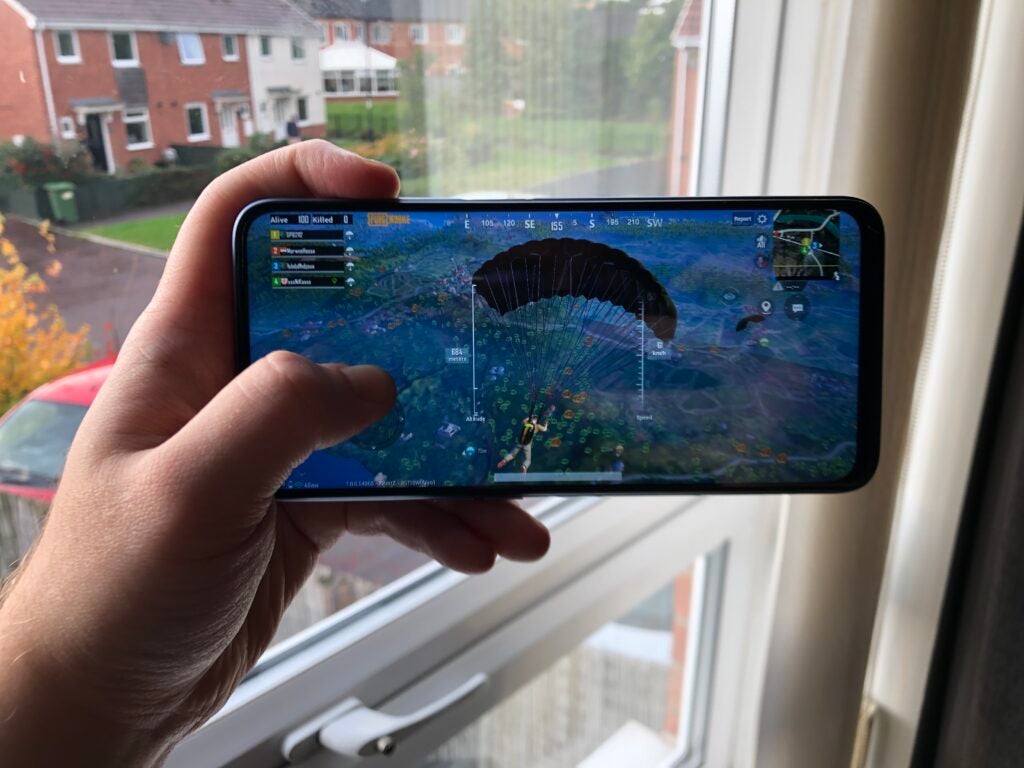 Something that isn’t plodding is the 30W fast charging. The 30W charging may not match the 65W SuperDart charging on the Realme 7 Pro but it’s still fast enough to save you from those forgetful low battery mishaps. Realme claims you can get 50% in just 26 minutes and, while in our hands-on testing we only managed 40% in that time, it’s still pretty swift.

Once charged, you should be able to keep this device going all day and potentially beyond with the 5000mAh battery onboard – but we’ll give this a full run out in our full review.

By far the biggest compromises you’re making for a device at this price come in the form of the camera and the speakers. When gaming or otherwise, you’ll want to whack some headphones in (yes, there’s a jack) as the single speaker at the bottom of the device is pretty poor and particularly easy to cover in landscape mode.

While the quad-camera setup will require some more in-depth sample analysis, first impressions are pretty poor. In normal use, basic shots are often overly bright or overly dim and rarely offer a ton of detail. The macro camera is a fuzzy mess when used in any meaningful way and the portrait lens doesn’t do a great job of identifying the focal point.

If you’re a basic user who loves to game on your phone and doesn’t want to shell out even mid-range prices for a device then the Realme 7 is definitely a viable option.

For anyone else, there are some significant sacrifices in general performance, camera and speaker quality. However, faster charging, a handy physical fingerprint scanner and a pleasant 90Hz refresh are also here to sweeten the deal.