Oppo has had a stellar 2020 so far, with its Find range knocking it out of the park. In our in-depth reviews, we gave the Oppo Find X2 Pro an almost perfect 4.5-star score and the same score when to its non-Pro Oppo Find X2 sibling – with the rest of Oppo range reviewing strongly too. Now, the Reno range is back and we’re kicking things off with the Oppo Reno 4 Pro.

The Reno4 Pro will immediately grab you with some striking design choices. This is a big phone but the size is mitigated by the taller aspect ratio. The new Reno is also stunningly thin for a phone with such strong specs across the board, at just 7.6mm thin. 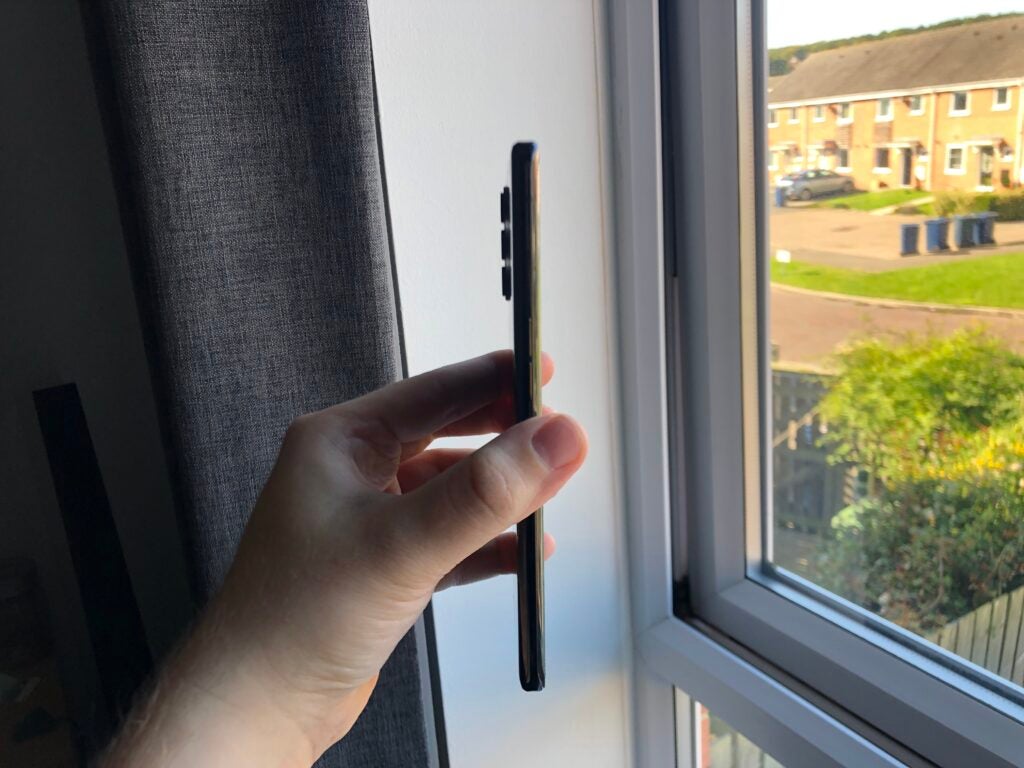 These two features combine with narrow metal rails to truly give you the feeling you are holding a premium device, with echoes of Samsung’s latest devices as a much more attractive price. That is until you venture around to the rear of the phone.

The camera bump isn’t half bad, it’s far from ugly and the triple camera setup isn’t obscenely large. However, it’s the plastic back that’s less than ideal. The plastic gives the impressions of glass and, particularly on the Space Black model we received, fingerprints and dust shows up to no end. The alternative Galactic Blue has a matte “Oppo Reno Glow” back that looks like it’ll be less reflective. The plastic is also a dramatic departure from the more premium display and outer edges of the phone.

The back features numerous Oppo logos splashed across the bottom which we aren’t too sure about as well as a strange rainbow-coloured reflection when the light catches its rear. Nevertheless, these factors might be small enough to be forgiven due to the enticing price point. 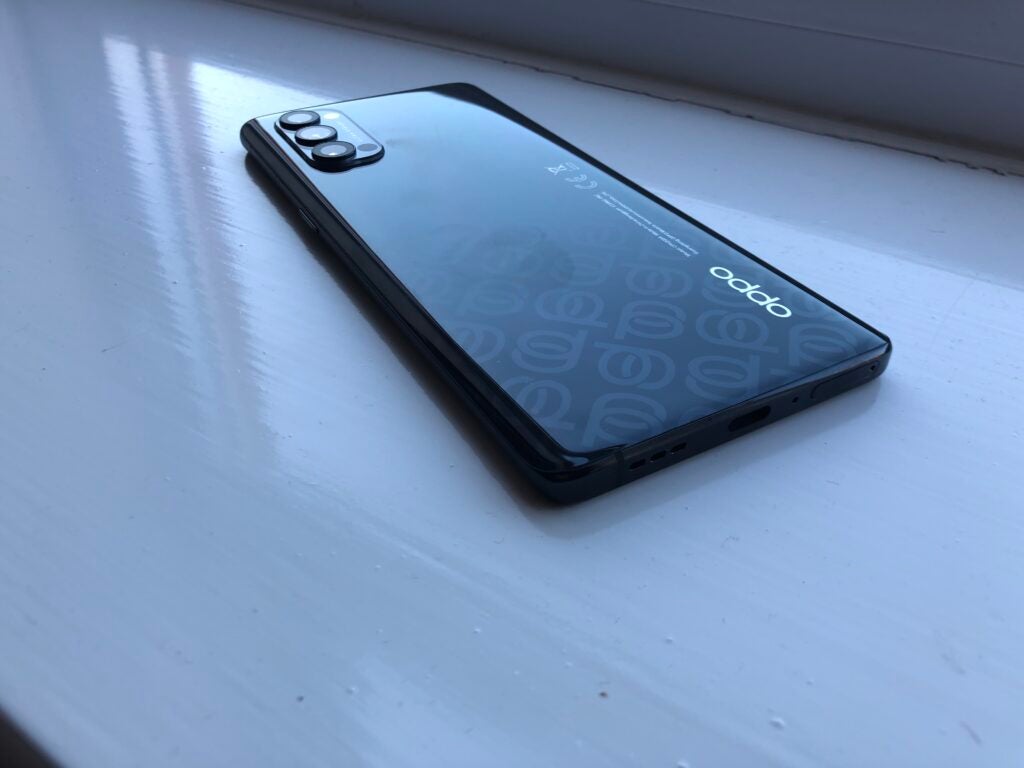 With 12GB RAM and the increasingly popular Snapdragon 765G on the inside, the Reno4 Pro deals with almost any task with ease – and that 90Hz display only goes further to make the experience running smoothly. It may not wield a chip from the flagship Snapdragon 800-series line but the 765G often makes you feel like any upgrade would be unnecessary.

The speakers offer decent performance too – headphones will always be better but there’s a decent amount of clarity here and plenty of volume. The stereo speakers are housed by the earpiece and at the bottom of the phone, meaning it is unfortunately quite easy to cover one when using the device.

While the tall curved panel looks impressive when it’s off, it may not wow you once on. The 90Hz refresh rate is always a welcome addition but we aren’t too sure about the rest of the display’s qualities. The screen gets up to a decent brightness but it is a far from a direct sunlight beater that some competitors feature. The colours feel a tad washed out too, that’s to say the display would be fairly shunned to the scrapheap but it certainly lacks vibrancy. 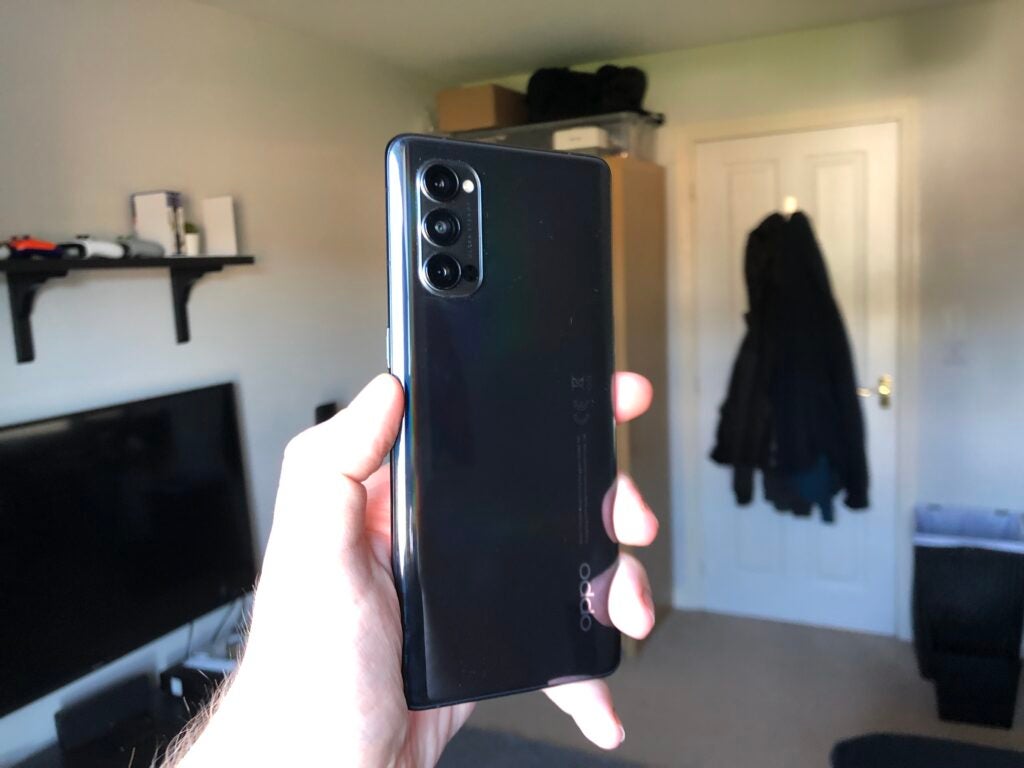 The Reno4 packs in two biometric login options – Face and Fingerprint – and both seem to work well, reacting snappily. Our main qualm is the confusing next step. The fingerprint jumps you right into the home screen while the face scan requires you to swipe up. This complication seems quite unnecessary. Despite this small frustration, Color OS 7 is pleasant to use overall – being a fairly rudimentary skin on top of Android.

We gave the camera a quick runout during our hands-on and it seems to make strong use of the features it has on offer – mid-range phones have had a habit of including some nonsense additional sensors of late. With the Reno4 Pro, you get a….. The wide-angle sensor does what it says on the tin and the macro feature can get some terrific detail. While in more run-of-the-mill circumstances, you’ll get some extremely detailed life-like snaps…… CHECK

Aside from the eye-catching first impression this phone gives when you open the box, the other attention-grabbing feature is the 65W SuperVOOC charging. We gave it a swift run-out, charging the phone from around 50% up to 100%. The Oppo Reno4 Pro managed this feat in around half an hour – not too shabby at all.